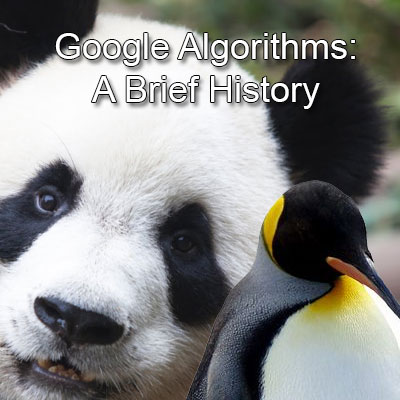 Google, the leading search engine, has come a long way since the early days of internet. Google entered the scene at a time when the search landscape was made up of many with smaller competitors… Altavista, Meta Crawler, Hot Bot, Ask Jeeves and more!

Today, almost everyone uses Google to find relevant information and there’s a good reason for that — they work hard to make their users happy.

Google wants to make sure that their users get the best search results, so they constantly implement algorithm updates to outmaneuver spammers and improve the quality and relevance of the search results. These SEO updates exist to make sure the best content is always prioritized (ranked in the first page of Google), and users are pleased with the results of their searches.

In the last ten years, Google published a lot of major algorithm updates, with each one having a huge impact on the overall search engine optimization.

Let’s explore some of the biggest Google algorithm updates and how they impacted the SEO world.

Perhaps Google’s most iconic update, Google Panda was released to make sure high-quality websites always perform better than low-quality, content farms. This was a revolutionary algorithm update as it transformed the SEO field and made sure white hat SEO is the standard for years to come.

This update also focused on the user experience, making sure that users don’t get spammed with ads, links, and popups. On top of that, authority became an important element when discussing topics. Websites that had a lot of authority were pushed higher in ranking than those that did not.

With Panda, Google managed to slow down and kill many websites that were using black hat SEO techniques to cheat their way to rank #1. Sites that are still trying to use black hat SEO methods keep getting shut down by this update to this day.

The Panda Algorithm has been constantly rolling out since 2011 and so it is now more difficult to pinpoint exact dates for new Panda algorithm updates.

Google’s core algorithm is updated in real-time, therefore Google no longer publishes updates in regards to this algorithm.

The goal of Google Penguin was to punish websites that engaged in things such as keyword stuffing and unethical link building. There was a trend in the SEO world to have as many links as possible linking to your website, and many businesses abused this. That’s where the Google Penguin update came in.

Instead of focusing on the quantity, Penguin put emphasis on the quality of the links. Suddenly, if you had a car cleaning business in New York City, that backlink from a construction company in Los Angeles no longer had any worth for your business.

This algorithm update enhanced Panda’s performance by making sure authority figures remain important when it comes to search engine optimization and building backlinks to your website. In simple words, a backlink from Forbes will be worth more than 100 links from sites with no domain authority. Quality over quantity.

If you think Panda and Penguin made a big difference, just wait to hear about Google Hummingbird.

In short, Hummingbird is a whole different animal (hah). While previous updates were just additions, Hummingbird was looking to become a whole new search engine. It is now considered as a standard core algorithm that drives all of Google’s search efforts. Google explained that the name associated them with two things, speed, and precision.

Google Hummingbird’s goal is simple — to make sure that emphasis is put on content with “natural language, context, and meaning over individual keywords”. This was the most significant core updated in the past few years, making search engines appear more “human”. This update also contained a lot of visual and local updates.

There are no shortcuts to Google ranking anymore — you have to create quality content that users like to consume. Old tricks such as keyword stuffing won’t work.

Released: October 2015 (officially announced by Google)
Status: Active, part of the core algorithm, acting as an addition to Hummingbird

A revolutionary update in the SEO world — Google RankBrain changed everything.

As a part of Google’s core algorithm, RankBrain uses machine learning to show the most relevant results to its users. In short, RankBrain works entirely on its own by studying data, testing and optimizing itself to make sure users are happy with the results.

Before RankBrain, Google had to test things manually to see what works and what doesn’t. Now, they no longer have to do that. Instead, RankBrain does everything on its own. You might think this would create a lot of problems since there’s a lack of a human element, but it’s actually 10% more efficient than Google’s own engineers.

How to make sure your website is optimized for RankBrain?

If your users appreciate your content, RankBrain will recognize that and rank your content higher. Nobody knows the exact way it works, but the basic understanding is that it analyzes how users interact with your content and decide whether it’s better or worse compared to other stuff on the internet.

This algorithm update was focused solely on local searches, trying to improve the user experience of said queries. It uses things such as location and distance to determine the most relevant results for users.

If you search for “Restaurants near me”, you will get results based on your location with Google Maps at the top. In the past, you would simply get text-based content as a result. Google Pigeon made local search a lot better.

With this update, Google announced that having SSL certification (https) on your website would result in a ranking boost for SEO. Since these websites were considered “safe”, Google decided to boost their ranking compared to other websites that were not secure.

As of July 2018, Google brands all non-https websites as “Not Secure”, severely impacting their SEO performance.

Google’s mobile-friendly update shocked some SEO experts, naming it the “Mobilegeddon”. With this update, Google wanted to make sure websites with mobile-friendly design are preferred over others. Sites that weren’t optimized for mobile search got hit badly.

This change did not impact searches made on desktop computers, only mobile searches.

This algorithm updated ensured our current (2019) standard that every website should be mobile friendly. If your website is hard to browse on mobile, it will affect your mobile SEO. Make sure you adapt to this if possible.

In March 2017, there were reports about an update that caused a drop in rankings for many websites. Google’s Garry Illyes jokingly named it “Fred”, stating that any update from then on with no official name will be called Fred.

In the end, it was concluded that Fred consisted of many different updates, most likely aiming at websites that focused on monetization rather than quality. These websites were hit and saw a significant drop in rankings.

As one of the latest and biggest updates to the algorithm, the “Medic” core update massively impacted websites in health and similar industries. While there are no official statements, it is believed that this update was aimed to slow down and de-rank lower authority websites talking about topics of health, wellness, finance and similar.

The best way to adapt and improve your ranking in case of a drop is to refer to Google’s webmaster guidelines. Keep working on your white hat SEO methods and you will see positive results as time goes on.